Tsukuba International Strategic Zone participated in AAAS (American Association for Advanced Science) exhibition, held on February 14th to 16th in Chicago, the United States.
We introduced about us and our projects on the exhibition.

AAAS is the organization, which promoting science and technology in the United States. Also, AAAS issue science journals.
Various symposiums and workshops are held during the annual exhibition, and many universities and research organization exhibit about their research.

It was the second time for us to participate in the exhibition following last year. We exhibited the replica of HAL®（Hybrid Assistive Limb®）* in the entrance of Japan exhibition booth, and it had many people’s attentions from children to adults. Also, many people asked us  about HAL® such as the usage rate and the effect. 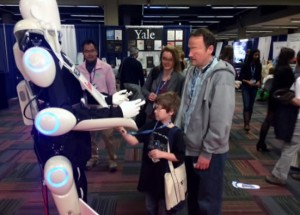 *HAL® [Hybrid Assistive Limb®] is the world‘s first cyborg-type robot, by which a wearer‘s bodily functions can be assisted, amplified and extended. (CYBERDYNE Inc)

This entry was posted in Events, News, TOPNews. Bookmark the permalink.